by Jennifer Porterfield | Last Updated: November 1, 2021
As an Amazon Associate, I earn from qualifying purchases at no extra cost to you. Thank You for your support.

Generating power and being quiet always feel like they’re Batman and the Joker. Sherlock Holmes and Professor Moriarty. Harry Potter and Lord Voldemort. The two should not, instinctively, ever go together.

But this idea of power and noise going hand in hand is really only a product of our domestic experience – and only then, the experiences we notice… because they make a lot of noise.

Put batteries in a flashlight though and no one comments on the noise, because there’s no noise to hear. Turn on a lightbulb, and with the occasional exception of a small buzzing hum, you don’t notice the noise.

Quiet power is not only possible, it’s actually fairly fundamental to life as we know it. But if you’re looking for a quiet generator, life’s not that simple. Finding the best quiet generator in a market that’s full of generators with various signature skills and characteristics can take days or weeks of comparison shopping and review-reading.

We know that because we’ve done the research ourselves – so you don’t have to. Looking for the best quiet generator? We’ve got you covered. In a hurry? Here’s our top pick to start. 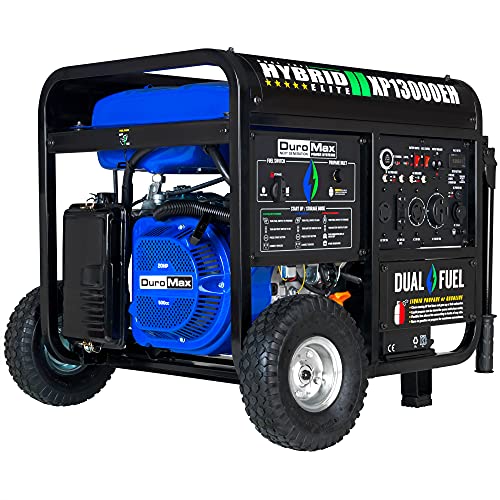 What? A giant dual-fuel behemoth is our top pick for a quiet generator? We had to check twice, too. But the thing to keep in mind is that “quiet” is a relative term, just as much as it is an absolute one.

But quieter compared to other generators in its class is something to keep in mind, too. By reducing the noise level to 74 dBa, Duromax has delivered a dual-fuel generator that stands alone among other such generators for the noise level it produces.

Great – but how is it as a generator? Not too shabby, since you ask. It gives you 13,000 watts, has an electric starter, and is both EPA approved and CARB compliant.

Of course, being a dual-fuel generator, it has great fuel efficiency options, especially since propane is less expensive to buy and stores safely for longer than regular gas.

And with an 8.3-gallon fuel tank, it’ll keep generating the power you need for even some of your more heavy-duty electronics as long as you need.

It comes with 5 outlet options, including 2 standard household outlets for things like refrigerators and AC.

That’s why, while most people think of generators as a vital part of their leisure life, either in RVs and camper vans or out on boats, the Duromax has the potential to act as a true home backup in the event of a power outage.

And, with that 74 dBA sound level, while you’ll still absolutely hear it, it’s at least quiet enough to become one of those sounds you tune out as part of the noise floor – a thing most generators of its size and power can only dream of offering.

The WEN 56203i puts its promise of quiet power generation right in its name – it advertises itself as being “Super Quiet.” So how super quiet is Super Quiet?

Pretty good – just 51 dBa, roughly the same as a window AC unit or normal conversation volume. But that’s not the only plus: these generators are also rated safe for laptops, cellphones, tablets, and other electronics that tend to be vulnerable to overloading.

Naturally, at that decibel rating, you’re nowhere near in the league of the Duromax in terms of power generation. Pumping out 2000 Watts, the Wen really is more of a durable, portable leisure generator, and its 1-gallon fuel tank means you’ll be refilling it a lot more often than you would with the Duromax (roughly once every 25 hours of use).

But because it’s designed for an entirely different life and purpose, you have to slightly adjust your focus when looking from one to the other. In fairness, your 1-gallon tank here gives you over 4 hours of power at half-load, and you can also kick in an eco-mode throttle to make your gasoline last even further.

An eco-what-now? A clever little device that lets the generator detect when devices are plugged in or unplugged, and manages the generator’s fuel consumption in line with need.

With 5 outlets, including USB outlets, the Wen is a handy juice box for all your social electronics and has been certified safe for those devices too, so you can charge up all your windows on the world and the web.

It comes with an auto-shut-off in case of imminent run-dry, and indicator lights will keep you up to date on the state of your power drain. And the most fun and cunning thing about the Wen generator (the Wenerator? No, that would be silly) is that if you need more power than one can provide, you can actually connect two of them together for some supercharging potential.

If there’s one particular bugaboo with the Wen generator, it’s the habit it has of auto-closing the fuel line when you turn it off. That means if you’re looking to drain the fuel out before storing the generator for the winter or some such, you frequently find you have fuel trapped in the carburetor.

That aside though, the Wen generator is a small generator that really delivers what you need in terms of staying in touch with the world while on a camping or RV break. And with a 2-year warranty, it’s not likely to fail on you any time soon. 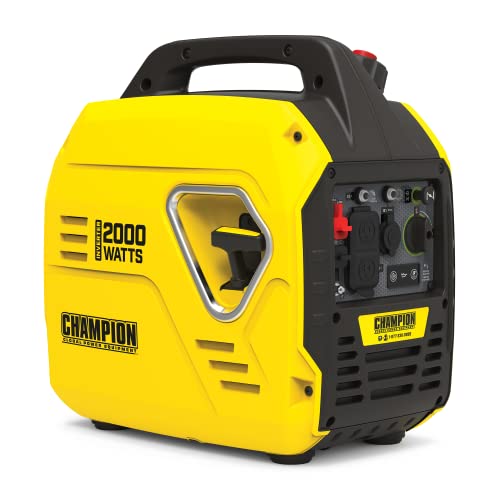 Portability is frequently the key with lower-powered generators. You need to be able to take them easily to where they’re needed, so the lighter the generator, the better the result.

The Champion Power Equipment 100692 gives you 2000 Watts of power generation – the same as the Wen – in a lightweight, easy-transport 39.5-pound module.

Don’t get us wrong, the Wen is hardly lightly to give you backache when you transport it either – the two are very similar in their basic build and intention. But the Champion is ultralight, so you’ll use it practically everywhere.

Is it slightly louder than the Wen? Yes, it is – you’re talking about 59 dBA, so normal conversational level with an occasional mind-blowing sneeze.

That has to be good enough for most uses, and getting 2000 Watts of power generation out of a unit as lightweight and portable as the Champion makes the difference between the noise level of the two generators practically negligible.

Five outlets, including a household outlet and a USB charger port, make the Champion as useful as you could wish for, and – again like the Wen – if you need more zing, you can connect a couple of Champions together for a power boost.

Meanwhile, a 3-year warranty gives you the chance to treat the Champion generator as a real generator on your RV or boat, rather than being overly protective of your investment.

The point of the Champion is ultimately its ultralight portability, but combining a range of outlets and a quiet decibel level makes the Champion a quiet generator to be reckoned with.

If you like the Wen and the Champion, you’re going to like the Westinghouse too – possibly just a little more than the others.

Just a little more, because where the Wen and the Champion give you 2000 peak Watts, the Westinghouse gives you one graded more at 2200 peak.

A gas-powered generator, the fuel tank is just slightly larger than the Wen’s too, at 1.2 gallons capacity. The other variables about the Westinghouse dance around the standards of the other two options.

With a dBa of just 52, it’s among the better options for quietness, and it weighs in at 46 pounds – heavier than the ultralight Champion, but by no means heavy.

Where the Westinghouse falls slightly behind is that it only has 4 outlets, rather than the 5 of some competitor units. Parallel connectivity to boost your power output is here too, and you get a 3-year warranty with the Westinghouse too, making it highly competitive with the other units.

What makes it extra competitive is that it’s highly budget-friendly, so you get a lot of the benefits of the other generators without necessarily paying as much as they would cost you. 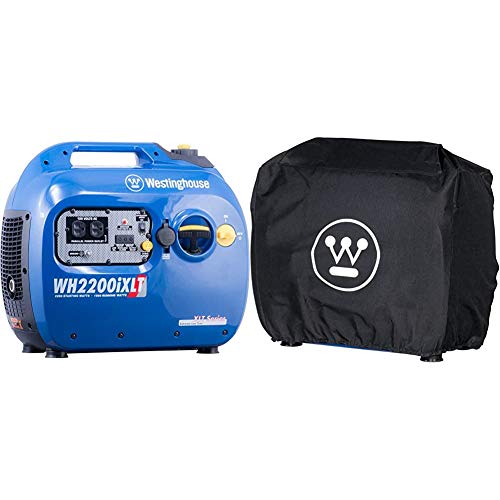 So it makes sense that it has the same dBa count of 52. Most of the rest of the stats are the same as several other units, too – you get 2000 Watts of peak power, and the 1.3-gallon fuel tank has an eco-mode that stretches the output you can get from it.

That said, the Westinghouse WH2000iXLT has interesting design features, including color-coded touchpoints, to help you navigate your way around its operation.

While the Westinghouse WH2000iXLT is a great option compared to most generators on the market and is almost as quiet as they come, its limited number of outlets might stop it from being your first choice, when compared to some of those higher on our list.

When you’re in the market for a quiet generator, there are a handful of things to keep in mind before you click the “Buy” button.

Power and Quietness – Where Is Your Balance Point?

So, when quietness is key to your satisfaction, it’s worth asking yourself how much power you actually need.

Think about how you intend to use the generator. Are you aiming to have a home backup, or an easy charging solution on your RV or boat?

Maybe even do an inventory of your typical power needs, because by lowering the point of your power needs, you can lower the noise levels too.

Whenever you’re about to spend money on making sure you get the quietest version of anything, manufacturers will usually charge extra simply because they’re selling a contender in your thinking.

Know your budget, and know-how important lowering the decibel level is to you in a generator. Always get the quietest generator your budget allows – but never obey the gambler’s pull to go beyond the money you can afford to spend.

After all, there’s no point in getting a super quiet generator if you can’t afford to run it or to go anywhere you might be able to make use of it.

Remember, you’re not just buying a quiet generator. You’re buying a generator to match your needs. Beyond pure power, you need to consider the uses to which the generator needs to be put – and then compare your needs with the features of the generator, its portability, its number and type of outlets, and so on.

You need to balance the quietness with the functions of the generator, and ideally find a perfect meeting place.

How quiet counts as quiet for a generator?

Ultimately, quiet is a measurement of how much comfort you have with the noise level in your environment. That can mean different things in different environments. As a power source to use as a home backup, you might be comfortable with 70 dBA or more. In smaller, more enclosed environments, something around 52 dBa – which is the equivalent of normal conversation – would count as being quiet.

Can I use a quiet generator as a home back-up?

Yes… and no. You can get a powerful generator that is quiet compared to others of its type, but most of the quietest generators on the market tend to be smaller, portable, and would not generate enough power to be used as a home backup.

Are propane generators quieter than gasoline ones?

Generally, no. They may well be more fuel-efficient, because propane usually costs less than gasoline, and also can be stored for longer. But there’s little difference in outright decibel level between the two fuels in a generator.